Across the geographies where ShoreZone has been completed the overall methodology of collecting low-tide imagery and completing the shoreline classification with descriptive biophysical attributes housed in a spatial database follows the same standard protocols. This consistency is at the heart of the ShoreZone program and enables spatial data queries over large geographic regions.

These protocol manuals provide users with insight into the classification rules and assumptions so that they can apply the data to a variety of resource management issues appropriately.

Please go to the NOAA Fisheries Alaska ShoreZone page and scroll down to the DATA subheading. You will be able to download a complete .zip file of the metadata.

Coastal Habitat Mapping 2017 – The most current ShoreZone protocols for Alaska were released in January, 2014, and cover Gulf of Alaska, Bering Sea, Chukchi Sea and Beaufort Sea. 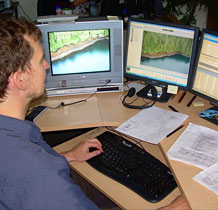