A partnership of people and organizations make ShoreZone happen. The ShoreZone Partnership includes scientists, GIS specialists, web specialists, nonprofit organizations, and provincial, state, and federal government agencies. In 2009 ShoreZone received the Coastal America Spirit Award from the U.S. Department of the Interior. The Nature Conservancy is the host for the ShoreZone website and provides the overall program coordination. The NOAA National Marine Fisheries Service provides the US federal coordination and data management services.

How are the surveys done?

ShoreZone gathers information on the biology and geology of coastal areas and makes maps of important characteristics. These maps describe coastal habitats and are used in many ways, including oil spill preparedness and response, coastal science and planning, search and rescue, and coastal trip planning. Some people simply use ShoreZone’s photos and videos to appreciate the beauty and diversity of the coast.

The mapping is done using video and still photos taken from the air, usually from a helicopter flying at low altitude. Coastal geologists and biologists onboard the helicopter describe the terrain and vegetation they see. Together the images and narration help the ShoreZone mappers classify and map the coast. ShoreZone mapping has been completed for over 90% of Alaska and all of Oregon, Washington, and British Columbia.

Who funds the surveys?

We assemble funding for ShoreZone from diverse local, regional, and national sources and there are over thirty partner organizations that participate in ShoreZone. The broad geographic scope of the dataset today is the result of combining dozens of spatially nested smaller-scale efforts. There are on-going ShoreZone programs in British Columbia funded by First Nations, Municipal Port Authorities, and provincial agencies. These efforts are updating older datasets from the 1980’s. In Washington the program was implemented from 1994 to 2000 with funding from Washington State’s Department of Natural Resources. Oregon was imaged in 2011 and mapped in 2012-2013 with funding from Oregon’s Department of Fish and Wildlife. In Alaska the diversity of funding reflects the many political and jurisdictional boundaries. Imaging and mapping in Alaska started in 2001 and is on-going with the Aleutian Islands remaining as the largest area to complete.

The conceptual framework of the ShoreZone habitat mapping and classification system was developed and tested on shorelines near the town of Victoria in British Columbia, Canada, in the summer of 1979. It was during these pilot projects that the use of oblique video imagery was tested for mapping the shoreline and the protocols for mapping the physical habitat attributes were first developed. In the early 1990’s, pilot projects were conducted to test the inclusion of biota as a habitat attribute, and based on this work the biological mapping protocols were developed. The biological protocols include the addition of still images to augment the video imagery.

Technological advancements are continually improving image resolution and quality. The low tide oblique aerial imagery has evolved from relatively low resolution video tapes and 35 mm slide film to high resolution digital video and still imagery combined with fast data storage media. The habitat attributes are spatially explicit and visualized in a GIS. Spatially disparate datasets can be stitched together because the core imaging and mapping protocols are standardized. Since the 1980’s the ShoreZone protocols have been implemented mostly on the Pacific Coast of North America. Today the ShoreZone nearshore habitat database and imagery are nearly continuous along the mainland from the border between California and Oregon to the border between Alaska and Canada in the Arctic Ocean.

A Steering Committee guides strategic planning for the ShoreZone program including identifying opportunities for partnerships, stakeholder and engagement, expansion of ShoreZone data, public accessibility, and funding opportunities. This committee meets regularly to discuss strategy and continue the growth of the ShoreZone program. A Terms of Reference document outlines the role of the Steering Committee. NOAA, National Marine Fisheries Service, Alaska Region has also developed a 5 Year Plan for the Alaska ShoreZone Program. This internal NOAA document outlines NOAA’s priorities for ShoreZone in Alaska from FY 2017 – 2021 and is strongly referenced by the Steering Committee in strategic planning.

If you would like more information about the Steering Committee or 5 Year Alaska ShoreZone Plan, please contact shorezoneorg@gmail.com. 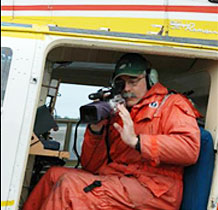